Thanks for getting in touch 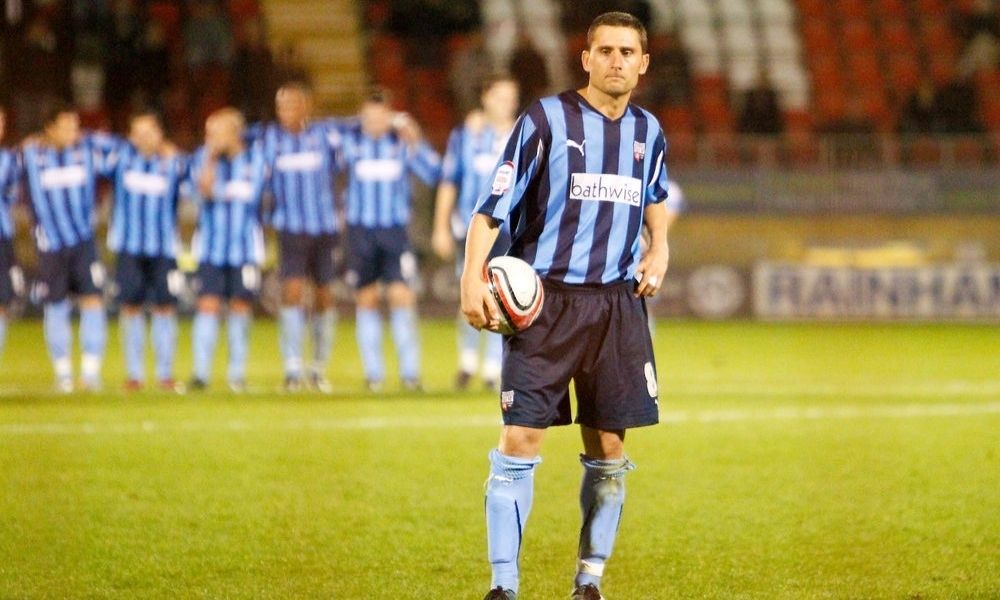 Why the Pressures of Penalties are a
Great Lesson for Life

It’s the business end of the football season now, with the success or failure of 10 months of hard work coming down to 90 minutes of football, and more often the case, a kick from 12yards in the form of a penalty shoot-out.

Pele once described penalties as a “cowardly way to score”

I’m not so sure, although as an Englishman, I have seen more than my fair share of penalty shootout heartache as a fan, let alone as a player.

We have recently seen Chelsea, Rangers and Swindon lose out in this way, and although I do think it’s not an ideal way to settle a big game, with lots at stake, I can’t think of a better way at present. Certainly, with an increasing number of games played, replays are not the answer.

Watching these shootouts recently have reminded me my time playing and the pressure that these situations bring, a pressure that cannot be recreated on the training ground, yes, the technique can be taught but the psychological aspect is much harder to address.

Pressure seems to play a big role in penalty shoot-out success. Research shows that if a player takes a penalty during normal time, they score on average 85% of the time. However, during a penalty shootout, players know that their penalty may decide the outcome of the match, resulting in the conversion rate of penalties taken during a penalty shoot dropping to 76%.

Interestingly, if a player steps up to take a penalty that will win the penalty shootout, and the match, the success rate rises dramatically to 92%, whereas if they have to score or else their team will lose, the likelihood of scoring drops to under 60%. 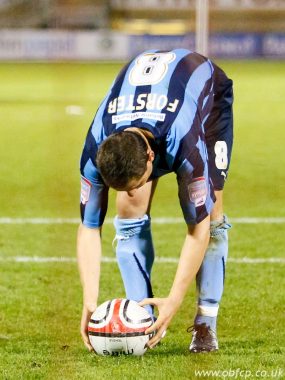 There is so much more to taking a penalty then just the kick itself, the nervous wait before it’s your turn, knowing where you are in the order and you’re moment looming closer with every kick taken.

The outcome of the kick before yours can add to the pressure if they score, and strangely reduces it if the opposition misses, its almost a comforting friend in failure should you miss too.

The painfully long walk from the halfway line to the penalty spot, it’s never ending, rush it and you look nervous to everyone especially the opposing keeper, go too slow and it prolongs the tension.

The placement of the ball is so important, I never rushed this, did it in my own time and everyone would have to wait, you’ll be surprised at how many penalty spots are worn out, bare and uneven, especially during a penalty shoot-out, placement is everything, I always made sure that the ball facing me was the right way up with the branding of the ball perfectly level which gave me a great connection point. I see players of all levels setting the ball just by rolling it into position with the underside of their foot, that’s not preparing the ball, for me that’s arrogance, connection is everything and making sure the ball is in a perfect position increases the chance of a better connection, the branding name or logo of the ball, be it Nike or Mitre was my point of contact.

The wait for the referee’s whistle, sometimes it seems eternal, the uncertainty in your mind, has the keeper read my intention? does he know? It’s all horrendous and works against you stacking the odds in favour of the keepers who always suddenly look bloody massive in the goal.

There is no doubt, penalties are a psychological battle between the goalkeeper and the taker, often keepers would come up as I was setting the ball and try and win the psychological battle, with a remark “I know where you’re going” or “I’ve saved my last 3 penalties” trying to tip the balance in their favour, I rarely got involved in replying to these remarks, not wanting any dialogue to make me irritated or frustrated before the kick, affecting my mind, everything was geared towards being calm and in control, the most I ever replied with was “okay fine” or “good”

I stuck to this plan, moments later when I scored I made sure after celebrating with the fans and players, I went back and had my say to the keeper with “what went wrong?” or “you can’t read them pal” – irritating I know but these exchanges have to work both ways, if you can’t take them then don’t give them. 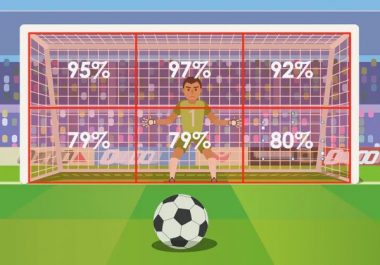 According to English Premier League data from 2010/11 to 2016/17, your best chance of scoring is to aim for the centre top of the goal, ironically I found 80% of my success in the bottom left corner which returns the lowest success rate of 79%. Being a right footed player it lends itself to this position.

There seems to be an increasing trend for stuttered run ups, skips prior to striking the ball and angled run ups, all which I think stacks the balance of probability against the taker and gives more advantage to the goalkeeper. Goalkeepers, a strange breed who have ruined many a good weekend of mine, are in a no-lose situation with penalties, a free strike from 12 yards means the taker is expected to score, any save from a goalkeeper’s perspective is a bonus.

For me taking penalties was a free shot against the keeper from 12yds – an opportunity – a chance to score another precious goal – for my team and for me – a chance to win – it’s a privilege to be given the responsibility of taking penalties, never did I look at it as a chance to be flash – greed is one thing which a striker has to have but being flash is something else – I advise anyone to watch Alan Shearer’s career penalties, no fuss, no gimmicks, no mercy, It was a real case of ruthless execution, business as usual, I can imagine him walking back to the halfway line saying to his teammates “business as usual, we don’t do pressure here”

For me his penalties were simply beautiful, far more impressive than a dink down the middle or trying to be clever by outsmarting the goalkeeper. 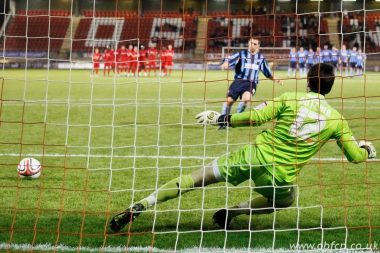 I recently did a talk to a group of young players preparing themselves for a big final, my advice to them was as it is to any player, at any level, and that is the focus on three things and no more.

1) Make your decision early and stick to it – indecision will always be more fatal than making the wrong decision, so to pick a spot and commit to it.

2) Strike the ball confidently and hard – focus on a good connection with the ball towards your target zone with firm yet controlled power.

3) Believe you’re going to score – belief is everything, in life, everywhere, if you believe you can, then you can!

By doing these three things you take a lot of uncertainty out of the situation, you simplify the act and that is a huge reliever off stress, anxiety and pressure.

These three key messages can be taken off the field of play and put into effect many other situations in our daily lives, especially in the professional working environment, where many have to take meetings on a regular basis, pitch new ideas or reports to a board or stand up in front of a large audience to speak. Glossophobia, or the fear of public speaking is said to affect 75% of the population, and as a public speaker myself, I still get a similar nervousness as I did on the pitch waiting for the referee’s whistle, when waiting to be called up on stage to deliver a talk. But just like I did then, I practise self-talk, reminding myself of those three golden rules, the decision on the content of the talk has been made and I’m committed to it, I’m going to walk out confidently focus on the opening lines and the connection with the audience, my target zone, and believe in what I have to say.

Watching Liverpool beat Chelsea in the penalty shootout in last weekend’s FA Cup final revealed some real tactical masterplans from them, goalkeeper Alison greeted every Liverpool player making the walk from halfway line to the penalty spot with the ball, offering some words of encouragement, the simple act was genius in having a familiar ally at the point where pressure and anxiety is at its highest, I’m sure this small act was enormous in settling the nerves of the taker.

Liverpool also held a central position on the halfway line, where as Chelsea opted to stand on the right side of the pitch, increasing the distance of the walk to the penalty spot, it’s only marginal gain but in the world of elite professional sport when everyone is looking for that 1% improvement, It can often be the difference.

We can also prepare for stressful life events, like taking a penalty or delivering a speech, with our daily routine. Breathwork and meditation are good practices to relieve stress and anxiety which can be used just before a moment when levels are elevated, like going on stage. Cold showers and exercise subject the body to micro stresses, as we push through walls (or barriers) by increasing our time in the shower or exercising more vigorously or for a longer time, we learn to cope with these stressors and increase our resilience.

All these tools I put into my daily routine and our fundamental towards that 1% improvement of self-development.

Penalties are part of the game, and increasingly more and more ride on them, just like football, there are moments in our lives just like penalties, and just like all areas the more we work on them, the better we become, so embrace the pressure, just like taking a penalty they are both a privilege and an opportunity.

If you want help with managing stress or stressful situations in your life, contact me for further information – nicky@nickyforster.com

Be the best version of you

Your journey to a brighter future starts here

This website uses cookies to give you the best possible experience. If you continue without changing your settings, we'll assume you're happy to receive our cookies. You can change your cookie settings or find out more at any time.

Thanks for getting in touch